Skip to content
Fossils.at
An overview on fossil sites

The Russian Ediacara Fossils are mainly been found on the White See, Arkhangelsk Region. One of the most interesting sites is located relative close to the City of Severodvinsk, about 5 km south of city diversion dam on at the Solza River. The most Vendian fossils we see these days on the market seems to origin from this locality on the Solza Riv er Banks. Other locality s for Vendian Fossils from this region are the banks of the Karakhta River approximately 2 km upstream from the road from Severodvinsk to Onega. An other Site is on the coast of the white see near the Zimnegorsk lighthouse. 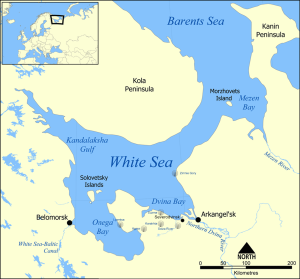 Paleogeographical these sites belong to the eastern flank of the Baltic shield.
As geological age for these eossils is usually the Verkhovka Fm. with  about 600 Million years refereed.
But also the Ust Pinega Formation (Valdai serries, Redekino Horriziont) is in use.
The Stratigraphical information in the literature is quite inhomogeneous. As the Correlation table below shows.

Vendian System of the White See

This is just a simplified correlation after Grazhdankin, 2003. Sokolov and Fedonkin, 1985 is not correlated in this table, but provides also an approximated age of 600 Mya.

Some Ediacara Fossils from the White See region.